I am irritated by my own writing. I am like a violinist whose ear is true, but whose fingers refuse to reproduce precisely the sound he hears within.

From the moment I picked up my first violin, I found it easy to make the instrument do what I wanted. My ear was true, and I could easily hear when my fingering was off and adjust accordingly. I was often dissatisfied with the sound I produced, because I played a beat-up loaner from the school. No matter how well I placed my fingers, the notes I produced were harsh and discordant. That changed when my mother’s foster-uncle loaned me his violin to play. It was a beautiful instrument with mother of pearl inlaid on the back. Its tone was old and mellow and it followed my commands obediently. I soon learned, however, that even my uncle’s beautiful violin was inferior to other instruments. I did not know that until my mom purchased my own violin from a concert violinist. My new violin was a 3/4 instead of a standard violin. Suddenly, everything felt right. I could hit the notes I intended and my violin had a light, delicate tone.

I started writing my own stories the same year I started playing the violin–the third grade. While writing was my passion, it didn’t come as naturally to me as playing the violin. While my violin produced the sounds I intended instantly, my pencil stuttered disobediently across the page. I just couldn’t seem to make the images that danced in my head come to life on the page. My brain felt as wooden as my violin, but did not sing as sweetly. Still, I persisted. After nine years, I gave up the violin. I never played it for enjoyment, but for the fulfillment of my mother’s frustrated childhood dreams. I, however, continued to write. Over the years, I started many projects, but left them unfinished. I grew frustrated with my uncooperative pencil, and let my writing routine lapse.

This fall, I realized that, unless I committed to putting that uncooperative pencil to paper every day, I would never be the writer I wanted to be. I committed to the NaNoWriMo challenge and completed my first novel. Every day, I berated my wooden brain and lackluster pencil for their lack of creativity, but I continued plodding to the end of my novel.

I realized that writing, unlike a violin performance, can be revised. Once I finished a violin solo, it was gone forever–the notes played and heard. I would never have the chance to repeat the performance and improve it. With writing, however, I can continue to work on a piece of writing that dissatisfies me until the words produce the melody that pleases me. I can let go the frustration I feel when I am drafting, because eventually I can make my writing sing. I will never be one of those writers who produces a perfect piece of writing on the first try, but I will eventually produce a masterpiece with dogged persistence and many revisions.

November is National Novel Writing Month. The website, nanowrimo.org, hosts a novel writing competition to honor the month. The goal is 50,000 words in a month. I’ve had an idea for a novel. I had even finished an outline for it, but had not had much luck progressing on the actual draft. This month, I decided to devote at least an hour a day to writing my novel. My daily goal is to write at least 1500 words. So far, I have written 18659 words. That’s the most I have ever written on a single writing project. I hope by the end of November to have the first draft of my novel finished.

In honor of the month, I decided to begin posting my novel here on my blog.

In the third grade, I discovered that the books I loved to read were written by actual people. I am not sure where I thought books and stories came from before I discovered this, but it was an important moment for me. I remember standing by Mrs. Hill, my third grade teacher, as she created a bulletin board. I asked her what the bulletin board was for and she told me we were going to publish our stories. She told me that all the books I read were written by people just like me. I was astounded. She also told me I was going to write and publish my very own book. 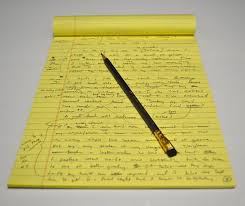 The day she posted my book on the bulletin board was the first day I considered myself to be a writer. My first story was about a bird who had lost its family. I designed the cover for my book and made my book in the shape of a bird. After school, I went home and told my mom I wanted to be a writer. She immediately bought me a large yellow legal pad and some sharp new pencils, and I began writing.

Over the years, I have filled up spiral notebooks, binders, and bound journals with my writing. My writing has gotten me through tough times–when I was stuck in dead-end jobs with no way out, when I lost teaching jobs, when I was sad or depressed. At times, I have stopped writing, but no matter how long I stay away from writing, I always come back to it.

When I write, I can express ideas that I am sometimes afraid to say out loud. I can be me without the fear of judgment or criticism. I can tell stories, state my opinions, and explore new ideas. Writing makes me happy and inspires me to improve.

Whenever I think about giving up writing because I am discouraged or it feels too hard, I think back to Mrs. Hill and the day I became a writer, and I realize that writing isn’t just something I do. It’s a part of who I am.

In his book, The Cat Who Walks through Walls, Robert Heinlein theorizes about the nature of reality and time. In his universe, Heinlein presents a multitude of worlds and realities all existing side by side. The universes created by writers are just as real as the readers’ universe and are waiting…

“I can see that, but I have a question.”

“Make it quick. I don’t want to lose my train of thought.”

“When are you going to use my name?”

“Yeah, my name. When you were outlining my, I mean, your story, you kept calling me Killer, but that makes me sound like some drug dealer’s 100-pound rottweiler.”

“The only drug dealer I’ve ever met with a rottweiler called his dog Lestat.”

“See–that’s the name of a killer.”

“No. I already had a son. You just tapped into my reality to use for your own gain.”

“No, I didn’t. I wanted to tell a story and your son happened to be in it.”

“I haven’t thought of your name yet.”

“No–you just don’t know my name. Just like you don’t know a lot of things.”

“No–like, when I was eight, I wanted to be a fireman.”

“So, instead of killing people, you wanted to save them?”

“It’s ironic, I know. But, you see, I never had a chance. My dad was never satisfied with who I was. My mom was busy with her career.”

“Wait! Wasn’t your dad a violent drunk and your mom a prostitute?”

“That’s just wrong. Just because I’m a sadistic killer that means I had to have a rotten childhood. I had everything I could want as a child, but the one thing I craved.”

“Ouch. But that’s no excuse for doing what you do.”

“That’s not the name I was going to give you.”

All written content and original photos are the property of Jane Ono. Unauthorized use and/or duplication of this material without express written consent from Jane Ono is prohibited. You are welcome to use excerpts and links provided full and clear credit is given to Jane Ono/Beginning Again.

Writing can open eyes and hearts and change the world.

Find mentor texts to inspire your writing and revision

A Look Inside Great Fiction

Haiku out of Africa

Gastradamus is my name, and Gassy Topics are my game!

Dive into a collection of memories, musings and emotions delicately concocted into stories and introspective articles

An Independent Non-Discriminatory Platform With No Religious, Political, Financial, or Social Affiliations

The Musings of a Writer / Freelance Editor in Training

Sharing Writing Tips (from the pros) & (my own) Writerly Musings

Making my way through crime fiction, one book at a time

O at the Edges

Musings on poetry, language, perception, numbers, food, and anything else that slips through the cracks.

I love to learn, and share what I've learned.

The Actions Needed for Mastering Your Motives

I hope that someone sees this page and decides not to give up...

Crafting my thoughts into poetry and prose.

Listen to your inner self..it has all the answers..

We are here to inform and inspire.

One Chance to See the World

"Diving into a writers soul is discovering the broken treasure and beautiful mysteries that make you gasp for air."

The Power of Story

Poetry that purrs. It's reowr because the cat said so.

Sharing self help tips/advice/blogs on how to make your life beautifully positive!