Kischan Atriya is a man with a mission–get into Cityscape 87, clear out a warehouse full of Dissidents, and get out alive. He has one problem–his commanding officer is out to get him.

The main character of Echo Volume II: The Taste of Ashes by Kent Wayne lives in a brutal world where honor is usurped by political gain. Piss off the wrong person and a soldier could find himself facing the muzzle of a gun. Knowing that he’s as good as dead doesn’t keep Atriya from committing to the mission–but, if he’s going to die, he plans on taking a few of his enemies with him.

The second in the Echo series, The Taste of Ashes begins with a vivid battle that seems to last forever, but, in fact, takes place in a day. A lot can change in a day, however, as Atriya finds himself facing insurmountable odds to survive.  Wayne’s lyrical descriptions weave haunting images in the reader’s mind that are difficult to forget. Readers who have never been in the military experience a taste of what going into battle against all odds must be like. 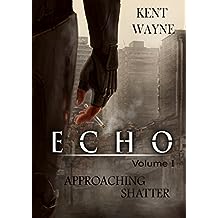 On Echo, an Earth colony in the distant future, the ruling class and its military fight a group of dissidents looking to overthrow the current regime. Despite the focus on military conflict, Wayne portrays the internal conflict of Kischan Atriya, a seasoned warrior. Atriya’s credo, “refuse to be weak,” has enabled him to attain a measure of success with the elite military unit, the Crusaders. Yet, with each achievement, Atriya continues to doubt his abilities.

While the novel contains one brutal, but crucial, fight scene, there is little external action. The important events occur within Atriya’s own mind as he attempts to pin down the source of his doubt. The introspective hero is a refreshing change from other all-powerful protagonists featured in other dystopian series. Wayne has crafted a protagonist with insecurities that many readers might share.

This novel presents a unique vision of Earth’s future. The writing is vivid. Wayne provides unexpected twists in the plot that keep the reader guessing.

All written content and original photos are the property of Jane Ono. Unauthorized use and/or duplication of this material without express written consent from Jane Ono is prohibited. You are welcome to use excerpts and links provided full and clear credit is given to Jane Ono/Beginning Again.

Writing can open eyes and hearts and change the world.

A Look Inside Great Fiction

Haiku out of Africa

Gastradamus is my name, and Gassy Topics are my game!

Dive into a collection of memories, musings and emotions delicately concocted into stories and introspective articles

The Musings of a Writer / Freelance Editor in Training

Sharing Writing Tips (from the pros) & (my own) Writerly Musings

Making my way through crime fiction, one book at a time

O at the Edges

Musings on poetry, language, perception, numbers, food, and anything else that slips through the cracks.

I love to learn, and share what I've learned.

The Actions Needed for Mastering Your Motives

I hope that someone sees this page and decides not to give up...

Crafting my thoughts into poetry and prose.

Listen to your inner self..it has all the answers..

We are here to inform and inspire.

One Chance to See the World

A guide for all things related to faith and simple living

"Diving into a writers soul is discovering the broken treasure and beautiful mysteries that make you gasp for air."

The Power of Story

Poetry that purrs. It's reowr because the cat said so.